The Blog of Richard Nightingale

Mexico 1986 ... I'd just graduated form the University of Portland, Oregon. Without the video replay technology that we have come to rely on today, the 'Hand of God' goal as it became known, stood and set Argentina on their way to beating England. Maradona would acknowledge the hand ball as the years past, but seems indicative of a bigger issue, a troubled life. An inability to cope with fame and pressure that plagued this adored but flawed man. For all his playing ability, there will always be an asterisk by his name, for the cocaine and performing enhancing drugs he used on and off the field throughout his career.

The 'undeclared war' between England and Argentina in 1982 over the Falklands had set the tone for the quarter-final match between the two countries at the 1986 World Cup. The past is dust, the goal counted, and Maradona scored a dazzling second minutes later to seal a 2-1 victory. Argentina went on to lift the World Cup that year, and one could suggest that the adulation and relentless public spotlight accelerated his personal decline. Nobody will remember the referee that day; he was a Tunisian, Ali Bin Nasser. Maradona never coped with fame. He escaped poverty in Buenos Aires, played for Boca Juniors, the club he supported as a boy, before wearing out his welcome at Barcelona. In the 1984 Copa Del Ray against Bilbao in front of King Juan Carlos, 100,000 fans, and a national television audience, Maradona snapped and started a brawl that left sixty injured both on and off the field. His fate sealed, it was off to Napoli to ply his trade. Here in Naples, the antics reached new heights. While Napoli was winning, and while that success continued, Maradona was protected by the club, the media, and the Camorra, aka Mafia. Drug use was rampant, excessive drinking, and children born out of wedlock. Debts mounted. He constantly missed games and practices, claimed "stress" issues. Failing one more drug test for cocaine, his welcome worn out, Maradona left Napoli in 1992. Sevilla, Newell's Old Boys, and a return to Boca Juniors were his swansong as a player. How good was Maradona? How many games did he play during his career without performance-enhancing drugs? No doubt, his advisors and entourage failed him, bled him financially dry, and used him for their own means. It seems Maradona never evolved from being that boy from the poorest of Buenos Aires suburbs, never being able to handle the stardom and attention without a stimulant in his bloodstream. He perhaps saw the stage, all he had as being temporary, living life on borrowed time. For all the praise heaped on him by players and managers, for me, he will always be someone who cheated the game. Given too many hall passes and fortunate that he played during a time when corruption was rampant, and soccer a release from economic hardship for many fans in the cities he played. Today, when we see Maradona in his late fifties, he looks like a man at death's door, his body destroyed by the self-inflicted abuse, a nomad looking for a gig as a manager, and one more interview. Now, a hanger-on in a game that worshiped him. The 'Hand of God' indeed. 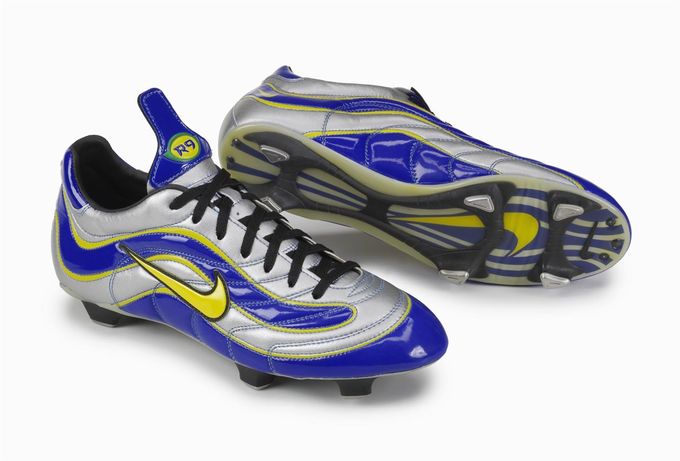 The original 'Mercurial' ... unveiled and worn by Ronaldo (R9) at the 1998 World Cup in France. The hosts beat Brazil in the final 3-0 at the Stade de France. Notable, was that, Ronaldo was omitted from Brazil's starting lineup, only to be reinstated, 45 minutes befor kick-off. FIFA declared Ronaldo, 'Best Player' in the tournament.

Teijin leather is a high-grade artificial leather pioneered in Japan and the material that revolutionized soccer boots worldwide. The original Mercurial soccer boot debuted from Nike in 1996. It was black, silver, and red aesthetic with a Teijin upper and outsole that featured blades versus traditional studs. The genius behind this innovative project was Sandy Bodecker.

One of Phil Knight's trusted inner circle, Sandy, had been charged with establishing Nike as a global soccer power. Sandy had a pretty simple personal creative ethos: Respect the Past, Embrace the Future. I had newly arrived at Nike Soccer to work on the commercial side of the business. I learned pretty quickly that being mediocre at anything just wasn't acceptable to Sandy. He was a visionary, and whenever I was at a meeting with him, I felt like a candle next to a lightbulb. I'll share the story about when I first saw the Mercurial prototype in 1995, but I want to share one more story with you. It was 2002, and I was at a strategy meeting for Nike Soccer.

Sandy had moved on to a new project, Action Sports, and Joaquin Hidalgo was in the big job. Joaquin put a slide of a piece of paper on the screen that read, ' Ronaldo, the best player in the world by 2002.' We all knew he was, at this time, acknowledged by everyone in the game. Joaquin then told us he had found this information written in Sandy's notebooks when he was looking through the soccer archives. Sandy had written this in 1994 when he wrote the soccer strategic plan for Nike Soccer. He had penned that thought eight years previous. In 1994, Ronaldo was 18 and a promising player that Sandy instructed his soccer sports marketing team to go out and sign to a lifetime contract! Well, it paid off.

The Mercurial silo of boots in 2020 now represents close to forty percent of all boots sold globally. That's just one silo of Nike Soccer's boot range. Back to 1995. At the time, Nike Soccer was run out of five thousand square feet of the Nolan Ryan building in Beaverton, Oregon. There were fifteen of us in the soccer division. Sitting in a makeshift conference area, Sandy walked in with a generic shoe box and placed it on the table we were seated around. We all promised under pain of death not to breathe a word of what we were about to see. Opening the shoe box, Sandy took out what seemed like a ballet slipper and just let everyone look at it, weightless in his hand. He then whispered, "This is the Mercurial, made of Teijin leather, will sell for $175, Ronaldo will wear first, and we will only initially make two thousand for the launch". The gathered group sat stunned. No soccer boot had ever had the commercial success that wasn't made of real leather, not black and white, and never over $90. Why would someone pay a premium for synthetic leather? As the Mercurial was passed around the table, those stunned expressions turned to smiles. Here was the future; this was leadership and innovation personified. Hello Soccer!

The rest is history.

Sadly, Sandy Bodecker passed away in 2019. 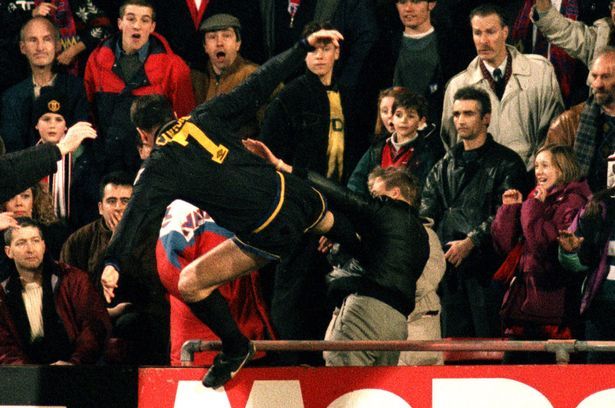 As Eric said, "When the seagulls follow the trawler, it's because they think sardines will be thrown into the sea. Thank you very much."

Given his marching orders, while playing for Manchester United at Crystal Palace, Cantona launched a 'kung fu' kick directed at Palace fan Matthew Simmons. It seemed Simmons had directed some very choice words at Cantona, who was walking towards the tunnel, and he snapped.

The talented Frenchman was no stranger to trouble, and it started very early in his storied career. 1987 to be exact when he punched his Auxerre teammate in the face. In 1998, he served a two-month suspension for aiming a 'kung fu' kick at a Nantes player. 1999 saw him kicking a ball at the crowd and rip his shirt off after being substituted. While on loan at Bordeaux, Cantona was involved in a fight with a teammate that culminated with him throwing his boots in the player's face. A minor incident comparably, he threw the ball at a referee in 1991 during a Nimes match. At the hearing committee to review the incident, Cantona walked up to every member and called them an "idiot."

Coming back from a short retirement, Cantona made his way to Leeds, where the turbulent times continued, but nothing major on the disciplinary front. More dressing room nonsense and unpredictable antics. Then it was on to Manchester United in 1992. A few red cards here and there, until the world witnessed the 'kung fu' kick that would call for him to receive a lifetime ban. He did receive a lengthy ban but returned to play for another season, retiring for good, once the season ended in 1997.

Cantona lamented on early retirement at age 30, "When you quit football, it is not easy, your life becomes difficult. I should know because sometimes I feel I quit too young. I loved the game, but I no longer had the passion for going to bed early, not to go out with my friends, not to drink, and not to do a lot of other things, the things I like in life."

Definitely a big personality in the game, Cantona played and continues to live life on his terms. His action at Palace was inexcusable, provoked though he was, but still. In his defense, we could say that he was a fiery competitor and a player that his peers would rather play with than against. Nobody doubted his supreme talent. We envied his confidence on the field and the arrogance with his collar turned up. He did leave the game too early, but we look back at his career with a smile and thankful he bowed out, for the most part, admired, not discarded by football authorities in shame.

I sat in the seat, one row directly in front of Cantona at the 2002 World Cup Final in Japan. Once again, like so many great players, smaller than I imagined. At halftime, he stayed in his seat and was mobbed by fans asking for autographs and pictures. Nobody watched the halftime show on the field. The attention and buzz were all directed at Cantona. It got so chaotic that I had to retreat from my seat and find cover. From what I witnessed, Cantona was gracious and accommodating to everyone, never refusing any request. Even five years removed from the game, his aura and magnetism were as strong as ever.

Brazil won their fifth World Cup that night, but Cantona looked unimpressed, and for just a moment, I thought I saw a sadness in his eyes, the pull of regret that he was sequestered in the stands and had not been part of the action on the field.